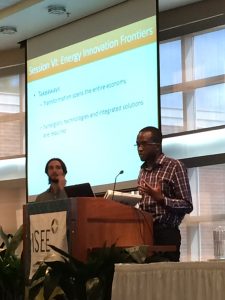 In September, William was among seven students that served as rapporteurs for the iSEE Congress titled Energy 2030: Paths to a Sustainable Future. William took notes during a themed session, and presented a summary to the congress during the rapporteurs’ report. The iSEE congress is always a highlight for the SRG, and the energy topics were particularly insightful for the group’s perspective on the energy-water nexus.